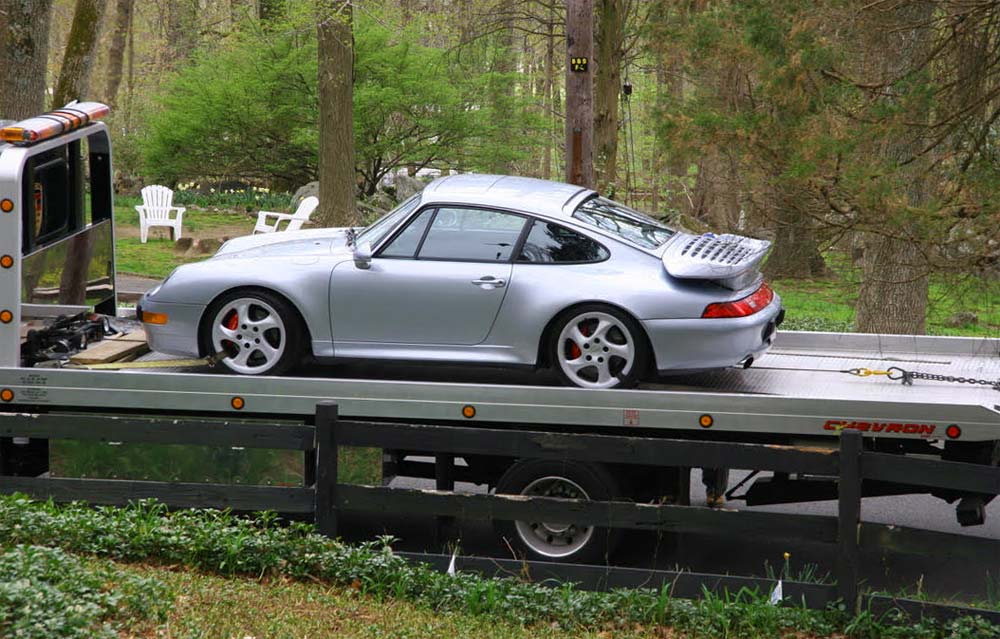 Need a Safe Place to 'Park' Your Money? Try a used Porsche 911

The iconic Porsche 911 has been a favorite of car enthusiasts for years, and it's also been highly preferred by those who want to have some driving fun, without breaking the bank. With its first model year in 1964, Porsche AG has produced over one million 911s from its production facility in Stuttgart, Germany, and they're not slowing down.

How Badly Do You Need the Latest?

Now, Porsche 911s have never been built to be affordable to the average wage-earner. A new one can easily set you back $200K+, with the Speedsters getting up into the $300Ks. So, if you really want to have the latest and greatest, and the extra 5 or 10 horsepower is worth a lot to you, well, go ahead and buy a brand new one, and be the first in your neighborhood to sport the latest brake caliper colors or carbon fiber air splitter.

The one problem with 911s, however, is that if you want to show off your brand new model, you're going to have to tell everyone that you bought a "new" one, or you're going to have to get a license plate that reads "2021-911". Otherwise, unless you have a trained eye, and really know the 911 well, the average person on the street won't be able to tell if it's right from the factory, or if it was built in 2004. Their styling is just so iconic, that Porsche merely tweaks their bodywork and design in the smallest of increments. Why mess with a good thing, right?

So, if you have to have 'new', and your bank account won't mind the hit, go for it, and don't look back. However, if you want to maximize the fun-factor, and want to run with the big boys, without writing a quarter-million dollar check, there are better ways to do so - and still stay within the 911 stable.

As with all vehicles, price depreciation is virtually guaranteed-especially if you purchase a new one. Inevitably, the older a vehicle gets, and the more miles you put on it, the less valuable it becomes-this is the norm within the car world, and exceptions to this norm are rare. However, the Porsche 911 is no normal vehicle, and despite over a million made over more than half of a century, they just don't seem to lose the interest of car enthusiasts around the world.

Evidence of the continuing appeal of the 911 can be found in the chart below, and on our 911 depreciation comparison tool. This chart displays the depreciation rate of the 911 against an industry average of luxury vehicles. As you can see, the Porsche 911 does in fact depreciate like all vehicles, but it does so at a much slower pace. For example, after three years, a 911 will be worth, on average, 79% of its original purchase price, versus the luxury average of just 67%. This is a striking difference, and is enough to rank the Porsche 911 #1 in value retention (after 3 and 5 years) among our rankings of 69 luxury vehicles. 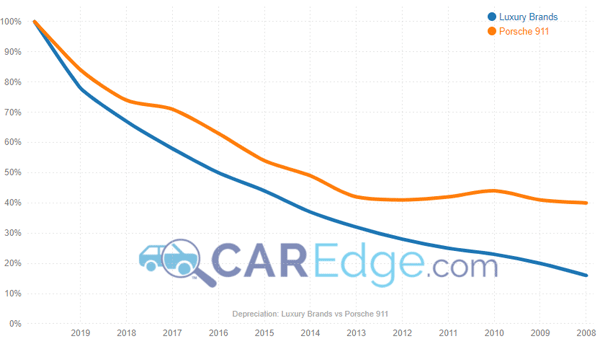 Drive a Porsche for Free, if You Make a Thoughtful Purchase

As impressive as the 911 is in holding its value in the first few years after leaving the factory, the real story occurs several years later. Referring back to the chart, one can see that depreciation literally stops after seven years, and maintains those price levels for the next five years. This essentially means that if you bought a seven-year-old 911, you could drive it for five years, and sell it for the same price-a feat that literally no vehicle model can match.

If you want to maximize your driving fun, while minimizing the hit to your bank account, consider buying a '10 - '12 911 (Porsche names these 997s). For $60-75K, you can find yourself a great, low-mileage car, of which, all but the highly-trained eye, won't even be able to tell that it's a used car. As long as you take care of it, and don't rack up a ton of miles, you'll likely be able to sell it for close to the same price that you paid - that's a pretty impressive value proposition. So, if you think that stocks are overvalued, and bonds are boring with their near-zero yields, how about parking your spare cash in a high-performance 911-it may be just the best investment you can make these days.

CarEdge.com analyzes various Porsche 911 ownership costs, and has cost comparisons and ranking for over 250 different vehicle models.  We also have over 300 '10-12 Porsched 911s listed for sale, ranging from a $39,000 standard 911 Carrera, to a GT2 RS, priced at $650,000. However, if you want to check out all of our new or used Porsche listings, we have over three thousand that you can view.

Which model and year do you recommend for our readers? Tell us your Porsche 911 resale story on our Facebook page.