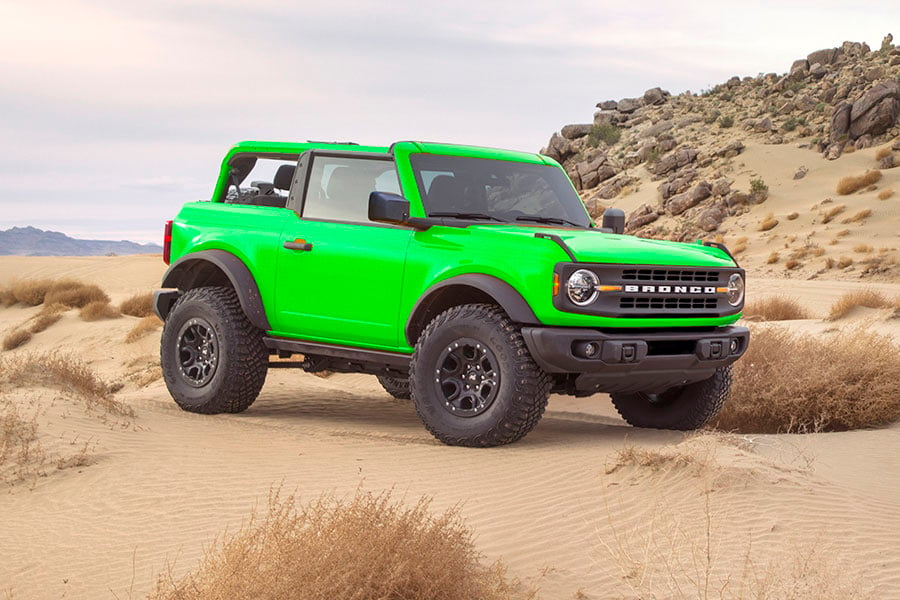 What will it really cost to be one of the first owners of the new Ford Bronco?

After a 25-year hiatus, the Ford Bronco will hit the market again next spring, and it has the automotive world all abuzz.

Many have already placed a deposit with their local Ford dealer to be the first in line to receive a Bronco once they become available, and they will undoubtedly turn some heads motoring down the street.  But, what does it cost to be the first person on the block to have the latest and greatest in the automotive world, and will you suffer from buyer's remorse, once your shiny new toy loses its luster?

For this article, we will shy away from the merits of the Bronco itself, and won't comment on its styling, performance and overall appeal-of which, we have no objections at all, and think it looks to be every bit a winner.  Instead, we will simply discuss the financial proposition of buying the latest hot SUV, versus letting someone else get all the attention. 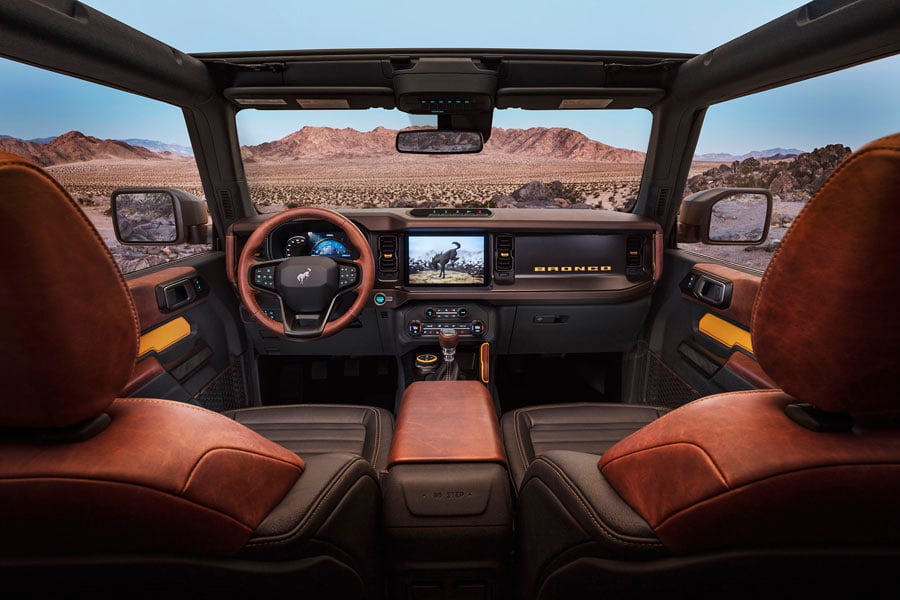 If the past has shown us anything in the auto industry, is that hard-to-get cars and trucks don't require a manufacturer's rebate to entice consumers to purchase them.  Ford understands this well, so we shouldn't expect to see any rebates on the Bronco in the first year, and certainly not right out of the gates.  Today, Ford offers a myriad of incentives to purchase one of their vehicles, and sorting that out is left to the professionals at the dealership.  However, a review of existing rebates suggest that Ford SUVs currently have roughly $3,000 in purchase incentives.  So, expect to pay $3,000 more versus other Ford SUVs which do have rebates and other purchase incentives.

As any savvy car-buyer knows, the sticker price (MSRP) is merely the "asking" price, and one negotiates down from there.  Currently, the average purchase price of a new Ford SUV is 11.5% below the MSRP, when rebates, incentives and dealer discounts are applied.  As an example, on a $40,000 Ford SUV, this amounts to a sales price of $35,400, or a $4,600 price reduction from the MSRP.  Of course, if we're talking about a hot, new vehicle that everyone wants, then your ability to negotiate below the sticker is significantly reduced.  This is highly likely to be the case with Broncos in their first year of production, as demand will naturally exceed initial supply.  So, don't expect any rebates, and don't expect any discounts when buying your new Ford Bronco.  (If you doubt us, just speak to the owners of any 2017 or 2018 Ford Raptor, who likely paid $5,000-$10,000 over MSRP for the right to own the hot vehicle of the time.) 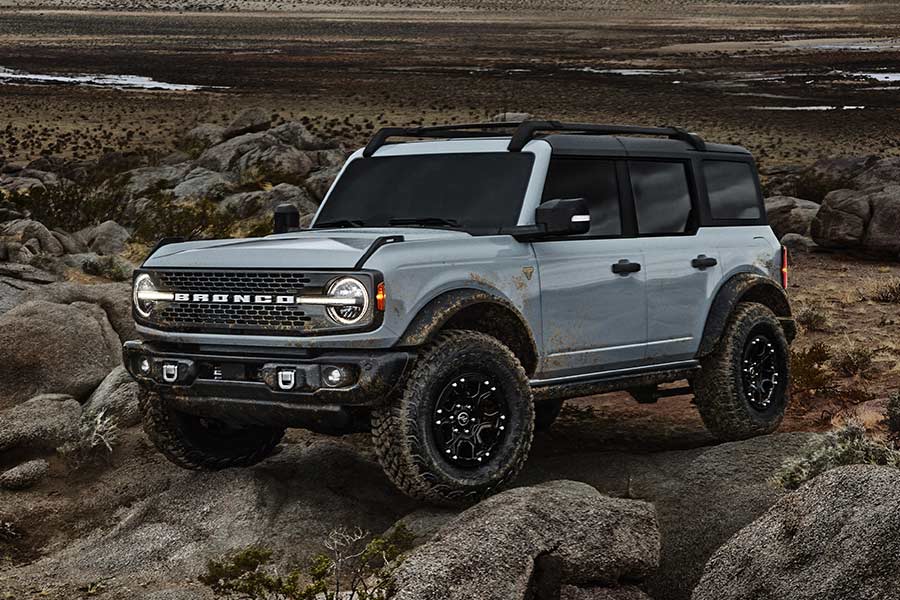 Car shoppers pay a premium to purchase their cars new, and once they leave the dealership, their value drops-by a lot.  What once was shiny and new, quickly becomes "used", and as a result, their values decline rapidly.  In fact, according to our analysis, the average new car declines 23% from its initial purchase price in just its first year on the road, and 31% in its first 2 years.  In using our example of an average vehicle with a selling price of $35,400 ($40,000 MSRP), the vehicle's value will decline in value to $27,250 in one year, and $24,425 in 2 years.  This represents a value loss of $8,150 and $11,000 respectively by the end of years 1 and 2. (Use our Depreciation Calculator to see results for your car.)

Beyond the first two years, value decline, or depreciation, occurs at a slower rate, and the annual loss is not as extreme.  However, depreciation doesn't go away-it only slows down from the rapid pace it experienced as a new vehicle.  After 5 years of use, the average vehicle loses 52% of its value from its initial purchase price, making your new car investment worth roughly half of what you paid for it when new-and that's the average, where roughly half do even worse than that.

The figures above, represent the "average" vehicle when it comes to depreciation.  However, when it comes to specific vehicles, namely other Ford SUVs, the results are less attractive.  We perform a depreciation analysis of over 200 makes and models, reviewing millions of resale values semi-annually.  For the 121 popular (non-luxury) models that we review for resale value after 5 years, the Escape ranks 88th in holding its value, with the Explorer ranking 92nd, and the Expedition ranking 107th-all well below average.  As a result, our calculations above underestimate the value loss that a Ford Bronco is likely to incur, once supply catches up with demand, and the Bronco loses some of its novelty.

We don't mean to pick on Ford, or the Bronco, as every hot car carries with it a risk of significant value loss, especially if purchased new when first introduced, and when demand is high.  While Bronco prices will vary significantly, depending on which model and trim level you choose, let's just stick with our $40,000 MSRP example from above.

If you were to purchase a new Bronco, you'll likely have to pay the $40,000 sticker price, or more, and dealers will not be in a mood to negotiate, as there will be a line of people behind you, all willing to pay whatever it takes to bring one home.  However, like most new hot vehicles, their luster fades with time, supply catches up with demand, and down the road, they won't be the really cool thing that they were when first launched.  So, we have to expect that Bronco resale values will fall in line with other Ford SUVs over time, and that's worth some consideration.

Looking at Ford SUV resale values, and millions of data points over the years, we can expect that today's $40,000 Bronco will have similar residual values as the Explorer, and that in 5 years the same Bronco will be worth circa $17,000 (52% lower than a discounted $35,400 average sales price). Here is the Bronco model we used in our depreciation forecast analysis. 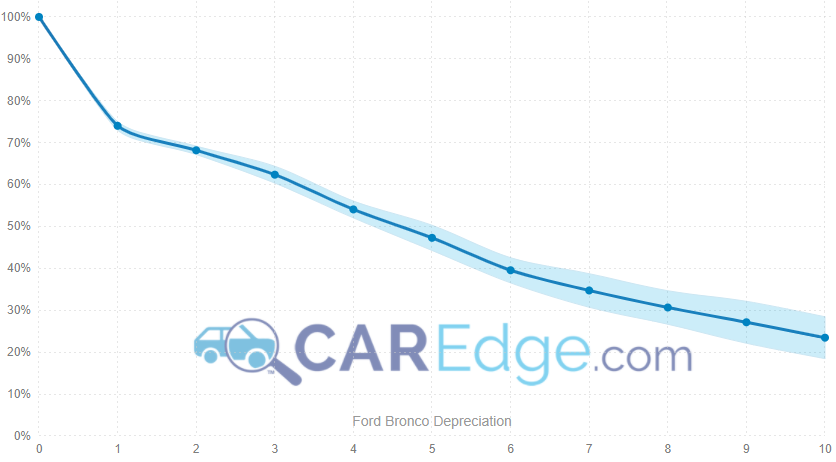 We can't tell you what it's worth to be the first person on the block to own one of the coolest new rides on the road, but we can tell you that if money is an influencing factor, buying the new, shiny thing that everybody wants, is not the way to go.  New cars lose value quickly, and hot new cars lose value even faster-especially since you will have to pay a premium in the first place.  Consult your spouse, consult your bank account; if either aren't excited about losing $23,000 over the course of 5 years, you may want to reconsider.  Then again, you only live once, so maybe it's worth it.  Only you can decide what's right for you.


CarEdge.com is an automotive research site, dedicated to providing car buyers with the resources they need to make informed purchase decisions. Our tools and analytics focus on the cost of owning and maintaining a vehicle (depreciation, maintenance/repairs, insurance), and the comparison of makes and models in these areas. Become informed before you buy your next vehicle by checking out CarEdge.com.